bladerunner900 wrote:Working on this Ted White skin, off and on. It's going to take a while as I don't feel very good at present.

Very nice! This will look awesome next to The A2A B-17 in the Sally B repaint!

Here is my first repaint for the T-6: 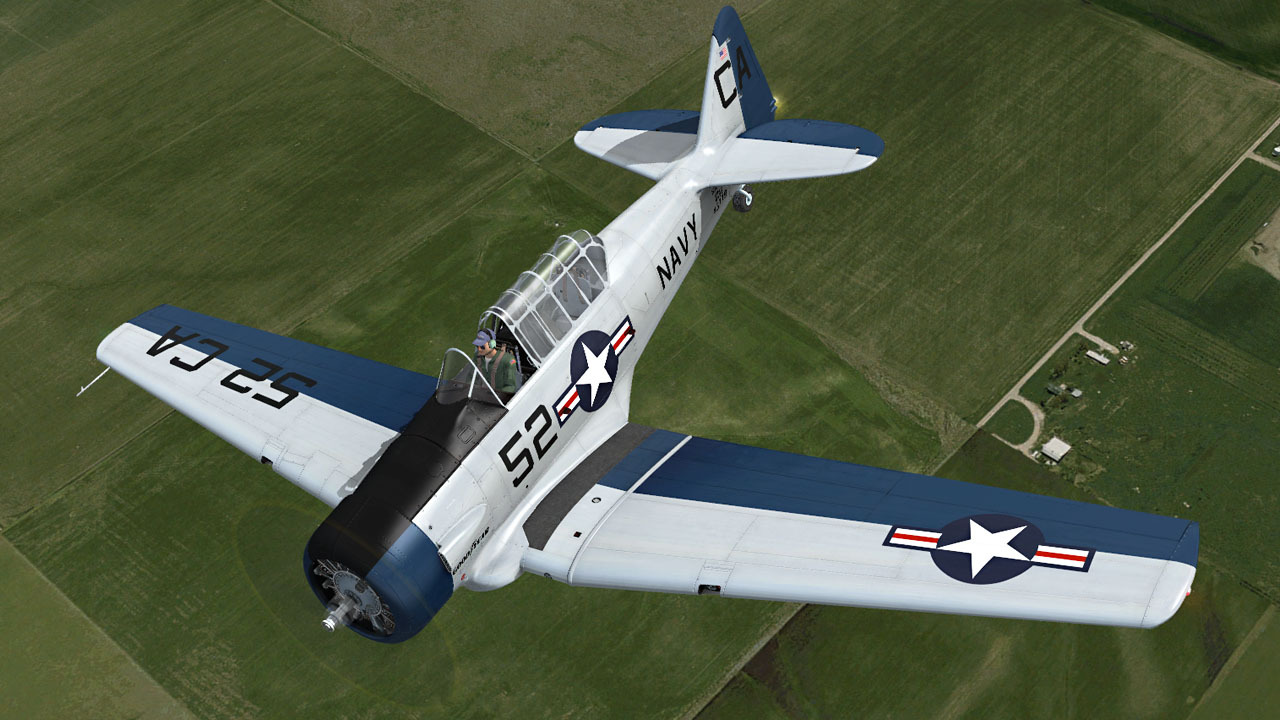 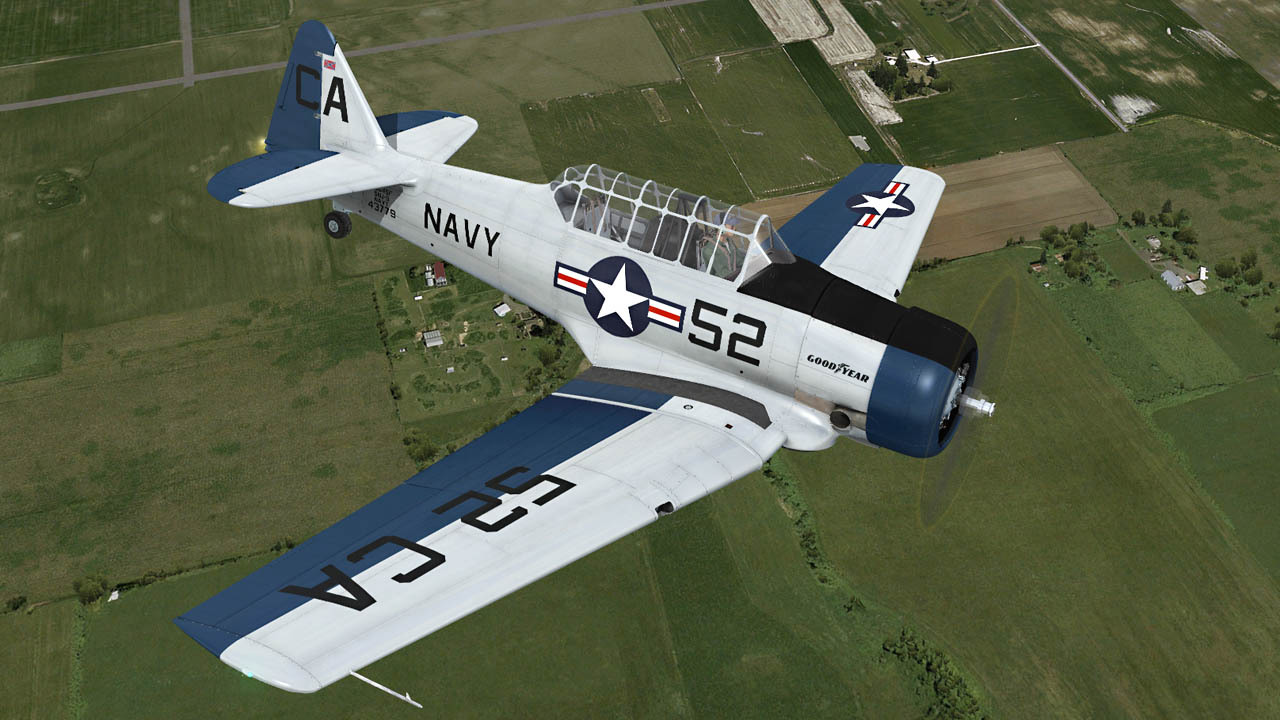 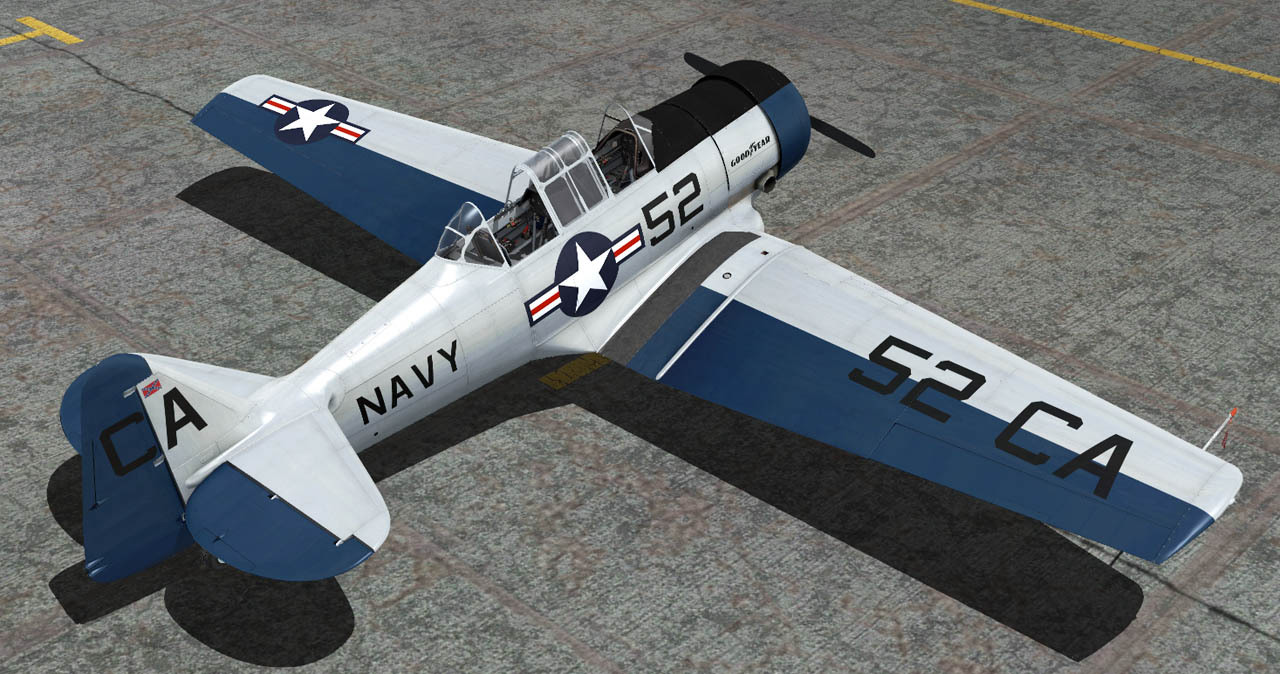 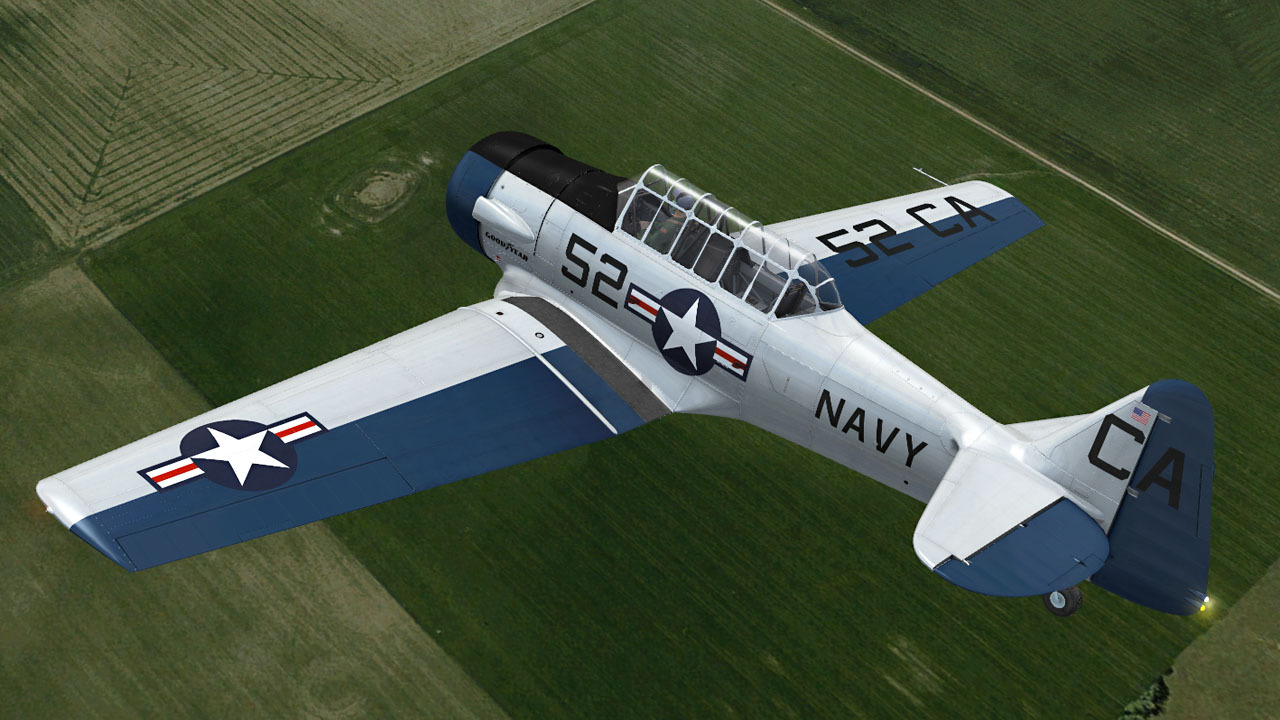 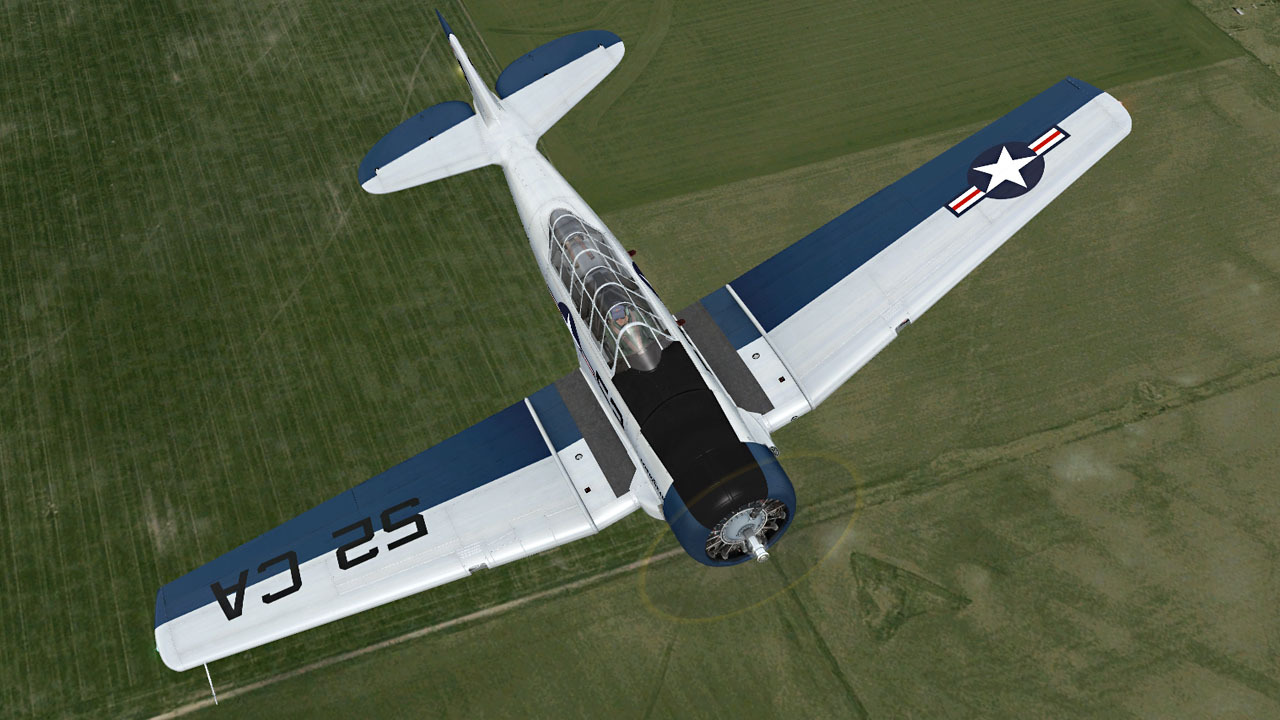 Greetings
Tim
My files in the Avsim File Library
Top

Here is N24554 of the Mid-Atlantic Air Museum in Reading, Pennsylvania:

Hi
I have some proposals to little by little introduce them. I hope you like them

Here is the finish work (notice the shoe prints

WOW! Certainly some really nice work in this thread. You guys are kick'n azzzzz.
Some of my repaint work (screens only)
https://www.flickr.com/photos/[email protected]/albums
Top

and a bit of background:
Belgian Air Force Harvard H210 as flown by Lt. Baudouin Carpentier de Changy, who was a fighter-pilot flying Hawker Hunter F.6's at the 7th Wing of ChiÃƒÂ¨vres, when he volunteered for duty with the Fire Assistance Flights (FAF) in Belgian Congo. Flying his T-6 4KA, armed Harvard H-210, he managed to rescue his fellow pilot Sgt. Guy De Pypere from the airfield of Matadi-Tshimpi in pure Hollywood-style. He landed in front of the astonished rebels occupying the airfield's tower, to pick up his injured friend who had made a belly landing in the high grass bordering the airfield after being hit by ground fire. Unfortunately de Changy was shot down over the Inkisi bridge a few days later on 17 July 1960 and although he survived an emergency landing, he was killed by the rebels.
FS painter at the Hangar
You'll find most of my paints here.
Top

And another German-based T-6 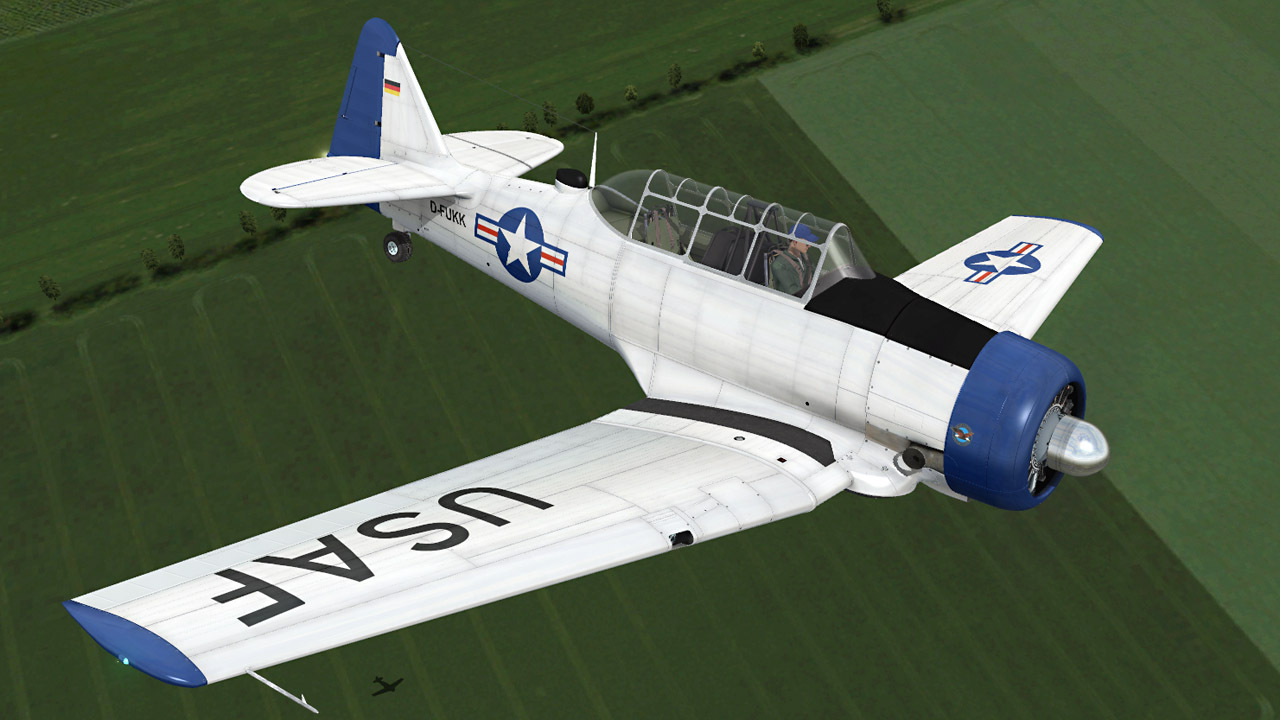 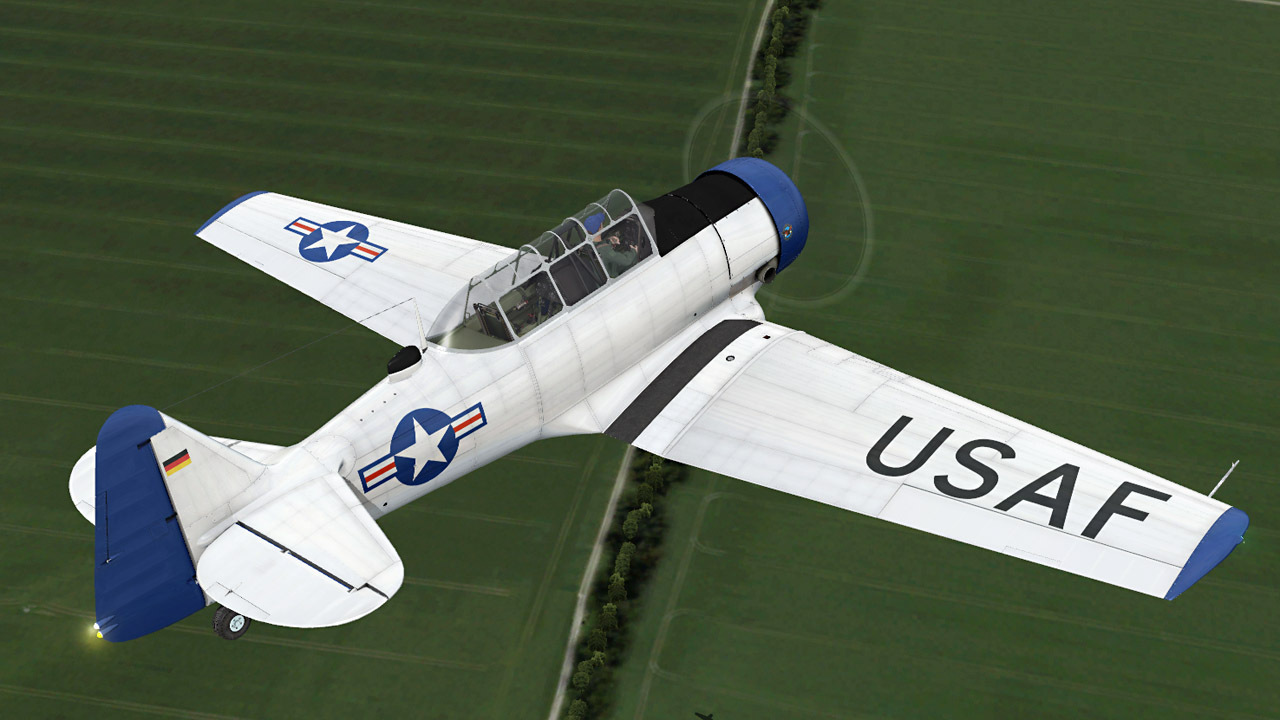 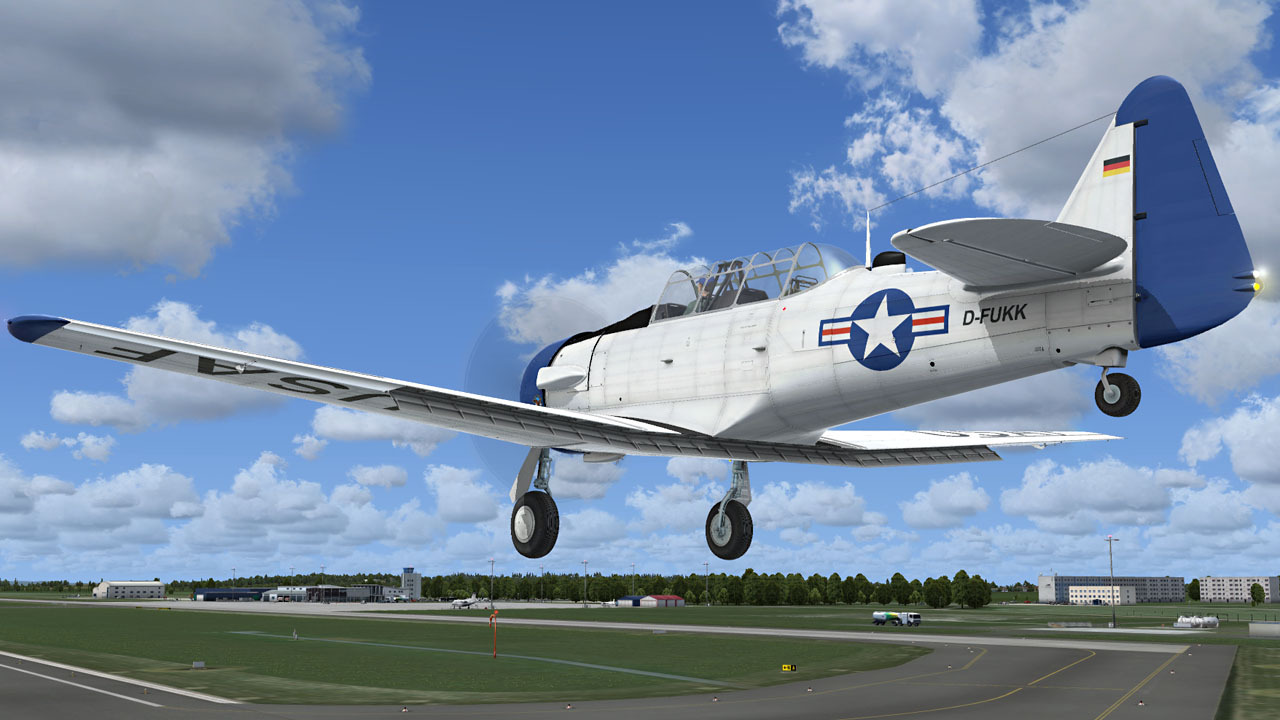 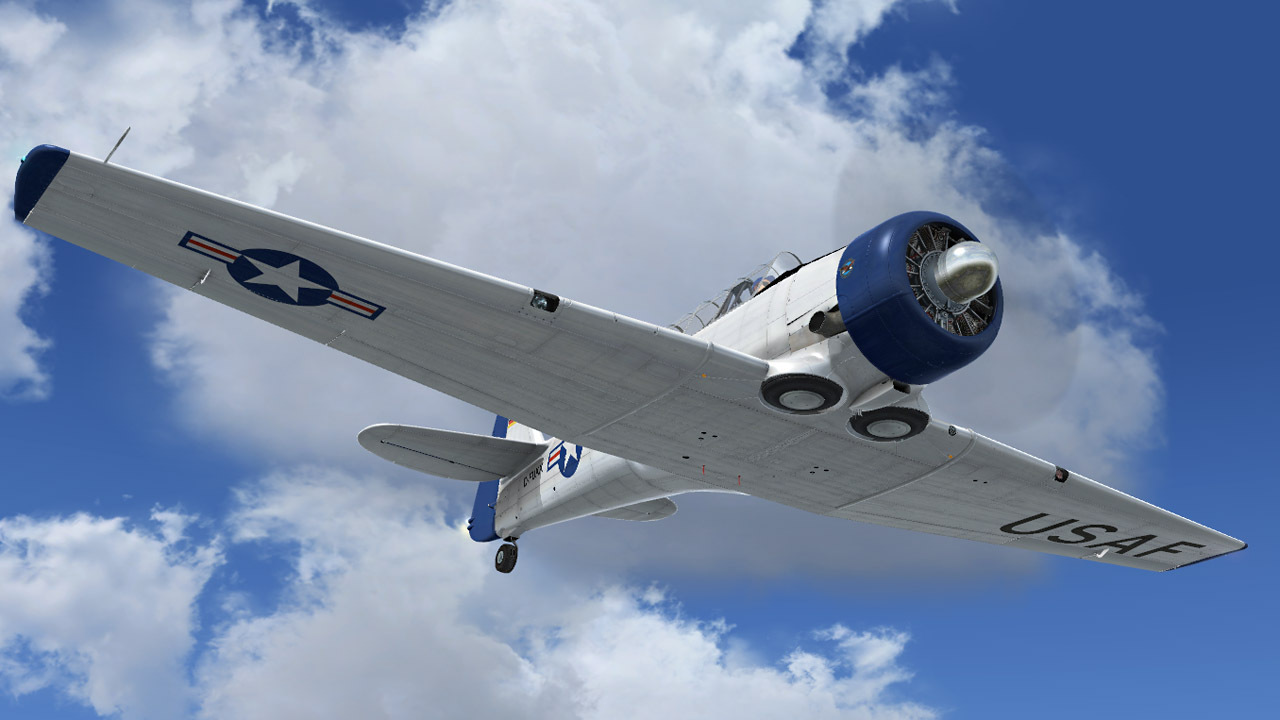 Greetings
Tim
My files in the Avsim File Library
Top

Beautiful repaints everyone! Tim, I recall seeing some photos of that German one last year, on a visit to Duxford, and I've seen the Navy one a few times at Oshkosh (always really liked that experimental paint scheme).
John Terrell
Top

A repaint of Kermit Weeks' Fantasy of Flight AT-6 has been uploaded to Avsim.com, Flightsim.com, and Sim-Outhouse.com, with the filename jt_a2a_t6_fof.zip

From my description: "This repaint depicts AT-6D/AT-6G 49-3311, registered as N3931Y, which is owned/operated by Kermit Weeks at "Fantasy of Flight" in Polk City, FL. This aircraft was originally manufactured as an AT-6D in WWII for the USAAF, but was rebuilt to AT-6G standard in 1949 for the USAF. The aircraft served in the Spanish AF as a "Caza 6", C.6-167, from around 1962 all the way until 1982, serving as both a trainer and a frontline ground support aircraft, with machine guns mounted in the wings and rocket launchers under the wings. Imported into the US in the 80's, and flying on the civil register, the aircraft is painted as a tribute to the Women Airforce Service Pilots (WASP), with the markings of Avenger Field in Sweetwater, Texas, where they trained. The WASP insignia "Fifinella" is applied to the cowling, which was designed by Disney during the war. This aircraft is one of those which have been covered by Kermit Weeks in his popular "Kermie Cam" flight video series on Youtube."

Awesome repaints guys! My hangar is gonna get full quickly

bastins wrote:Here is N24554 of the Mid-Atlantic Air Museum in Reading, Pennsylvania:


Just tried downloading this one and when unzipping, it reports invalid files. The problem seems to be with the interior (VC) texture files. I've downloaded twice and unzipped with different untilities and both have the same problem.

You exterior shots look great, though. Hope you can fix, if the issue is with your zip file.

Users browsing this forum: No registered users and 0 guests